In 1996, while I was teaching at the University of Cape Town, I was invited by the Truth and Reconciliation Commission to be an in-house critic at a town hall it had organized. A member of the largely black African audience told this story:

“Tom and John were neighbors. One day Tom stole John’s bicycle. They did not speak for years until the day Tom extended his hand to John and said, ‘Let us reconcile.’

“‘What about my bicycle?’ John asked.

“‘Forget the bicycle,’ Tom said. ‘Let it not stand between us.’”

John’s question has now turned into a growing social movement. Students and labor movements in South Africa are leading a mobilization of transformative potential by focusing on the land question to address the social and economic legacy of apartheid in the country.

President Cyril Ramaphosa, who was re-elected in May, conveyed his awareness of the challenge during his inauguration speech, saying that the country “can no longer abide the grave disparities of wealth and opportunity that have defined our past and which threaten to imperil our future.

The African National Congress won the May elections but with the lowest share of votes since the end of apartheid in 1994, illustrating its failure to address these disparities. The Economic Freedom Fighters, a far-left populist party that has been pushing for the nationalization of land, banks and mineral rights, got the votes A.N.C. lost.

South African apartheid borrowed key institutions from its North American predecessor. The Natives Land Act of 1913 appropriated 87 percent of all arable land for the whites and left a mere 13 percent for the black majority, who were herded into separate ethnic homelands. The American “reservation” became the South African “reserve” whose native inhabitants were governed by an ethnically coded patriarchal “customary” law enforced by state-appointed “traditional chiefs.”

After the Afrikaner National Party won the whites-only elections in 1948, it introduced formal apartheid. It ensured white hegemony by keeping black South Africans away from the urban-industrial economy by restricting their movement into cities, forcing back those who had left the reserves through mass removals and restoring autonomous tribal authorities in the reserves, charged with disciplining and containing its black population. The reserves were renamed Bantustans, the ethnic homeland areas for various tribal groupings.

Homes in Kliptown, outside the Soweto township. Over 27 million of the country’s 58 million people lack proper housing.CreditTomas Munita for The New York Times 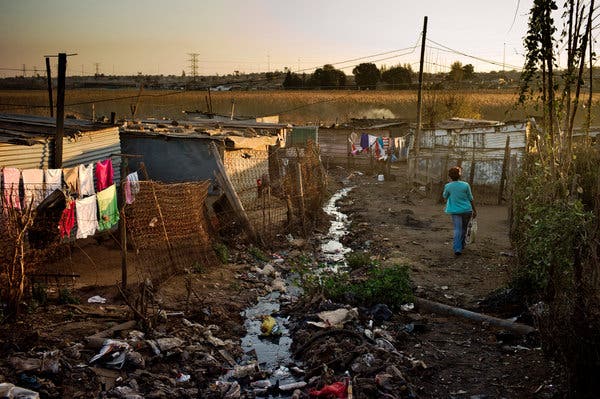 Homes in Kliptown, outside the Soweto township. Over 27 million of the country’s 58 million people lack proper housing.CreditTomas Munita for The New York Times

At the end of apartheid in 1994, 60,000 white farmers held 86 percent of all farmland. Thirteen million blacks, many of whose forebears had been dispossessed in 1913, held the remaining 14 percent, much of it poor-quality land.

Post-apartheid South Africa was marked by two glaring birthmarks: racialized inequality in urban areas and tribalized despotism in Bantustans. President Nelson Mandela and the A.N.C. promised to transfer 30 percent of agricultural land from white to black hands by 1999, securing their ownership rights through tenure reform, and to reform the power structure in the former Bantustans.

But it has failed to do either meaningfully. Instead of being democratized, chiefship was rationalized as native “custom.” In the new South Africa, nonracial democracy in urban areas coexists with ethnicized despotism ensuring chiefly control over land in rural areas.

A mere 8 percent of land was transferred from white to black hands over 24 years. The budget for land reform was pitiful — less than 1 percent of the national budget. The “Willing Buyer, Willing Seller” market-based reform, under which government bought large tracts of land from white farmers to sell pieces to landless applicants, allowed white farmers to drive up the price of land. And many whites weren’t willing to sell.

The demand for land is increasingly urban in South Africa. In the post-apartheid South Africa, a third of the population lives in predominantly rural former Bantustans, another third in urban areas that comprise both affluent suburbs and impoverished townships, and the remaining third in informal shanties around formal townships.

Out of South Africa’s 58 million people, over 27 million are without proper housing, living in matchbox houses built by the A.N.C. government, slum-type shacks, on farms belonging to others and in impoverished communal areas in former Bantustans, according to an estimate by Ben Cousins, a researcher at the Institute for Poverty, Land and Agrarian Studies.

How land is utilized and by whom has direct bearing on growing unemployment, which at the current rate of 27 percent is the premier economic and social issue in South Africa.

The post-1994 land reform program has been a dismal failure. And that failure and growing dissatisfaction have led to an intense debate on land reform, forcing the A.N.C. to introduce a bill in the parliament last year to carry out expropriation of land without compensation, which is yet to be debated.

The “Willing Buyer, Willing Seller” formula is defended by the Democratic Alliance, the main opposition party, a post-1994 liberal coalition of whites and the newly rich black middle class, which stands for an unqualified defense of the right of private property. 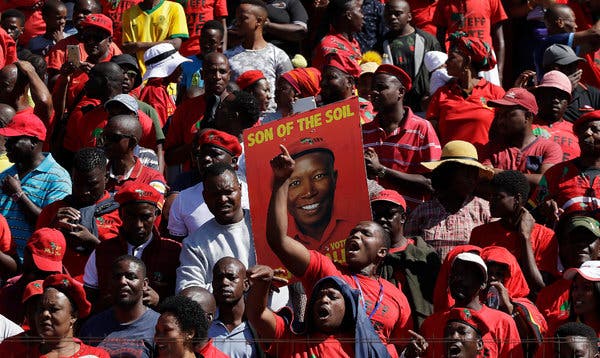 The Economic Freedom Fighters Party, which pressures the ruling African National Congress to address economic inequality and land reform, shown rallying before the national election in May. CreditThemba Hadebe/Associated Press

In 1996, Nelson Mandela signed into law the new Constitution of South Africa, Article 25 of which deals with land and property rights. It prohibits “arbitrary deprivation of property” but allows expropriation of land for “public interest” after “just and equitable” compensation.

Part of the debate focuses on whether the country needs a constitutional amendment to the sections dealing with land and property rights. Many in the A.N.C. say no, since Article 25 allows for appropriation without compensation where public interest is concerned. Skeptics argue that the clause will not deter endless litigation in courts. The Economic Freedom Fighters are calling for nationalization of all rural land without compensation.

On May 16, Mr. Ramaphosa assured foreign investors at an event organized by Goldman Sachs and the Eskom public utility that there will be no land grabs and that land reform and expropriation without compensation would take place in an orderly manner.

South Africa needs a triple reform to have an even chance of dismantling the social legacy of apartheid: a land reform that passes control over communal areas from traditional chiefs to the present tillers of the land in rural areas, allows the urban poor to produce food and graze livestock in municipal commons, and provides land for housing for the millions in informal settlements.

Without land reform, the A.N.C. and Mr. Ramaphosa will fail to lift a majority of the black people from abysmal poverty and will fail in ending social apartheid. Few doubt that the specter of Zimbabwe plagues South Africa’s political leaders. In the absence of a credible response to the land question, the A.N.C.’s fear of populism and demagogy is likely to come true.

Mahmood Mamdani is the director of the Makerere Institute of Social Research in Uganda, a professor of government at Columbia University and the author, most recently, of “Define and Rule: Native as Political Identity.”